There has been a settlement at Lissanoure since Celtic times because of its natural defensive position. Tradition tells that the crannóg (an artificial island often dating from the Iron Age and used for defence) on Lough Guile (also known as Loch-geal meaning bright lake, or Loch-gCaol meaning narrow lake) was the site of a dungeon where prisoners were held before being executed on Gallows Hill (also known as “Tulach-na-Croiche”) to the south. Another tale is told of treasure lying safe within the muddy fastness of the lake’s embrace, swift and dire consequences being prophesied as the penalty for any adventurous spirit who should attempt to search for it.

The crannóg in the middle of Loughguile

The earliest record of a castle situated at Lissanoure is one possibly built by Sir Robert Savage, Seneschal of Ulster, surnamed “The Great”, who died in 1360.

Other records show that Richard Óg de Burgh, second Earl of Ulster (also known as “The Red Earl”) could have built the first castle.

Scribe with the Earl of Sussex’s expedition describes the castle.

Owned by the O’Hara family, later of Crebilly.

Bought by George Macartney, who paid the O’Hara family £5,985 for 6,146 acres in 8 townlands. He was MP for Belfast and, as a plaque in All Saints Church in Loughguile records, he was “the oldest member of the House of Commons, having sat in Parliament upwards of 54 years”. In 1741 he purchased more land – the Dervock estate – from the Hon. John Skeffington for £7,205. It comprised 7 townlands including Dervock village, a total of some 2,189 acres. In eight years Macartney had become one of the largest landowners in Co. Antrim.

His son, also a George, became the father of a fourth George in 1737 who, as the only male of his generation, eventually inherited the Lissanoure and Dervock estates.

The Earl of Macartney (the fourth George Macartney)

Inherits Lissanoure and Dervock estates on the death of his uncle.

Embarks on a European tour.

Envoy Extraordinary to the Court of Catherine the Great of Russia.

Order of the White Eagle of Poland.

Marriage to Lady Jane Stuart, daughter of the Earl of Bute.

Begins to expand and improve Lissanoure Castle and the demesne. He rebuilds the old castle converting it into a Gothic mansion and had thousands of trees planted throughout the estate. He brought back exotic plants and trees from his travels and created what he called his “Pleasure Garden”. He also had canals cut and artificial lakes created, one with five islands in it. Visitors were often punted through this idyllic scene with lanterns hanging from the trees in the evening. 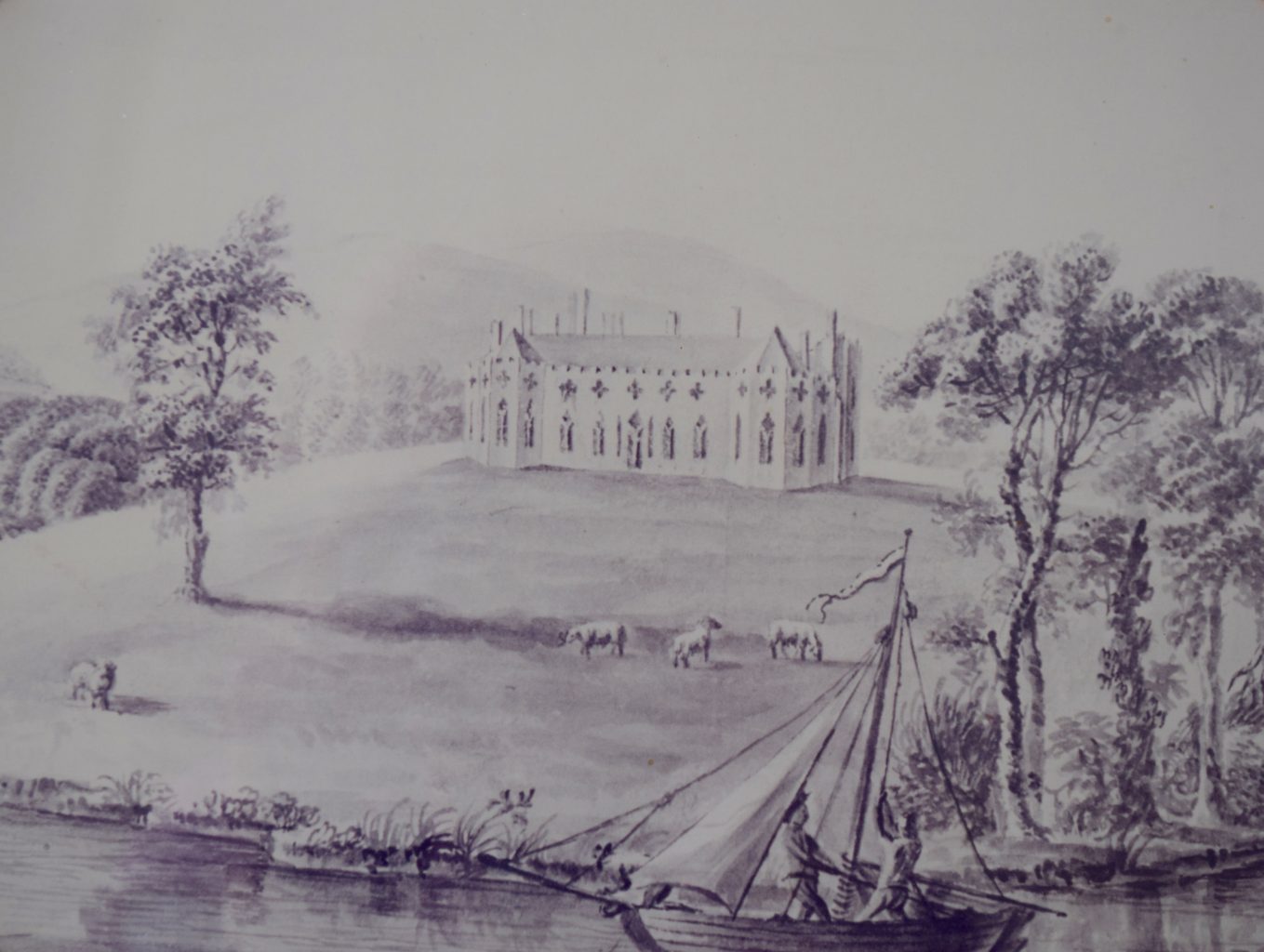 Knighthood of the Bath.

Barony in the Irish Peerage.

Inherits Killinchy and Porter Estates on the death of his father.

Unofficial mission to Ireland on behalf of Lord North’s government.

Viscountcy in the Irish Peerage.

Earldom in the Irish Peerage.

Unofficial mission to King Louis XVIII in exile at Verona.

Barony in the British Peerage.

Governor of the Cape of Good Hope.

Rebuilds Dervock and founds a market.

The Earl dies in Chiswick.

The Lissanoure and Dervock estates were left to his wife who had a life-interest. They had no children.
The heir was his sister’s daughter, Elizabeth Belaguier, who married the Rev. Dr Travers Hume, a Church of Ireland clergyman. However she never inherited the estates as she died before the Countess of Macartney.

Elizabeth’s eldest son, George Hume, takes on the Lissanoure and Dervock estates, with one of the conditions being that he assumed the surname Macartney.
He had expressed dissatisfaction with the existing castle as it was often in need of repair, for it suffered from damp, and the family had to move out for periods. He decided to rebuild much of it whilst, at the same time rebuilding an “elegant cottage in the later English style” near the edge of the lake.
He changed the Gothic mansion to a Georgian styled mansion extending the living quarters for the house into where the stables and coach houses were in the court yard. He then built on a semi-circular yard of grand dimensions for the stables and coach houses with an impressive Tudor revival archway and clock tower entrance. 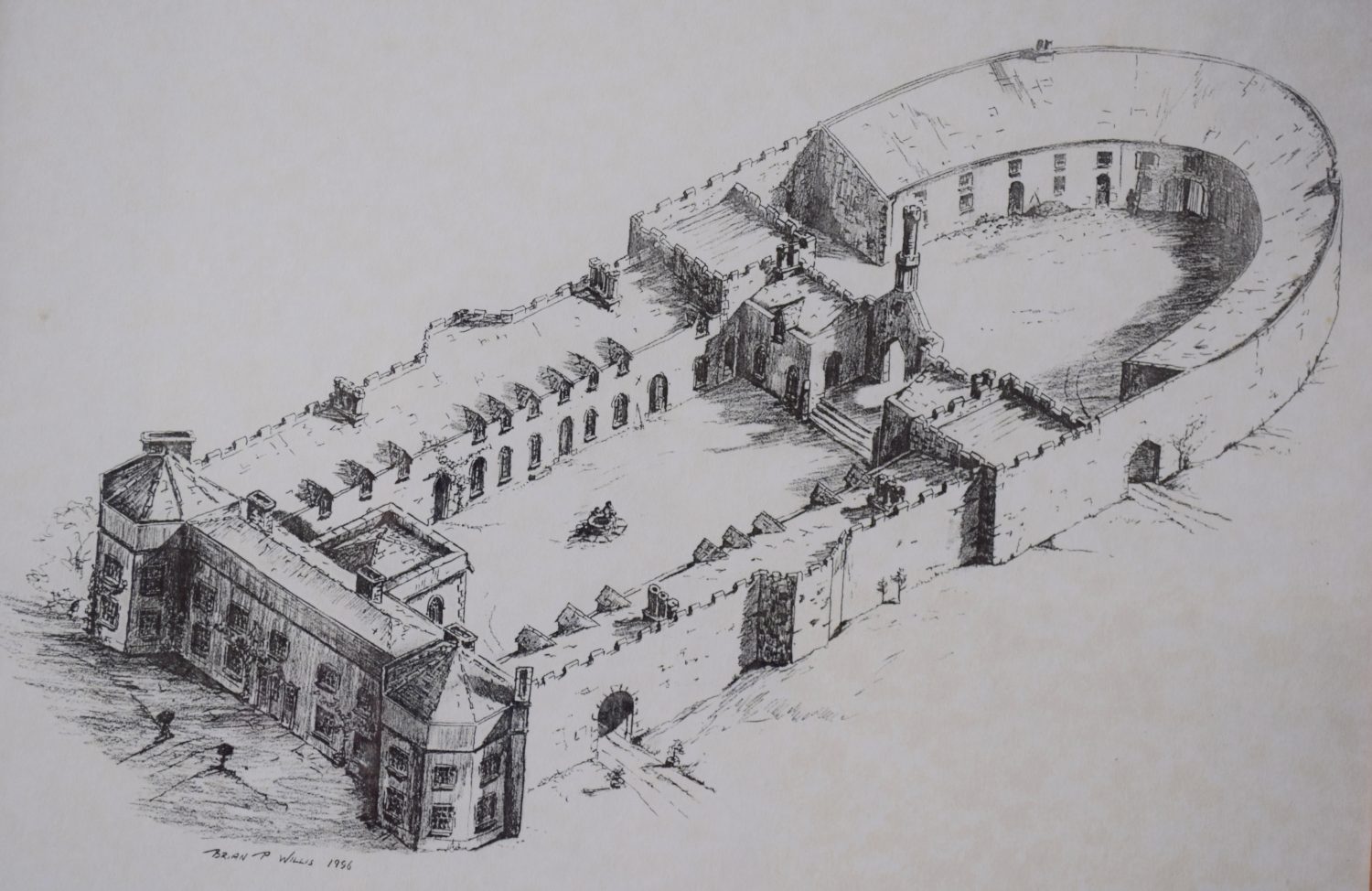 Dublin architect, J.B.Keane, exhibited in the Royal Hibernian Academy, as “exhibit 261”, a drawing entitled “Cottage Ornee, erected for George Macartney Esq. On the banks of Lough Gill, in his demesne and contiguous to his seat Lissanoure Castle, Co.Antrim.”

The cottage was rebuilt and the family lived there while renovations went on at the castle.

After a time at the cottage, the family were preparing to return to the castle when a terrible incident took place which was the talk of all Ireland.

A great ball was scheduled as a “house-warmer” for the night of the 5th October 1847 and, about noon, it occurred to the steward that a large quantity of gunpowder, which had been stored in the vaults at the time of the rebellion in 1798 by the local militia, might have become damp. He ordered that one of the barrels should be removed and examined in one of the rooms. When one of the casks was opened, the butler was asked to take the son and heir out of the room for safety and, as he closed the door, the draught blew some gunpowder into the fireplace, igniting the gunpowder and producing the most terrific explosion, wrecking the castle and tragically killing Mrs Macartney. From then on, the family lived at the cottage and the castle remained in ruins with only the coach-house and stables still intact. 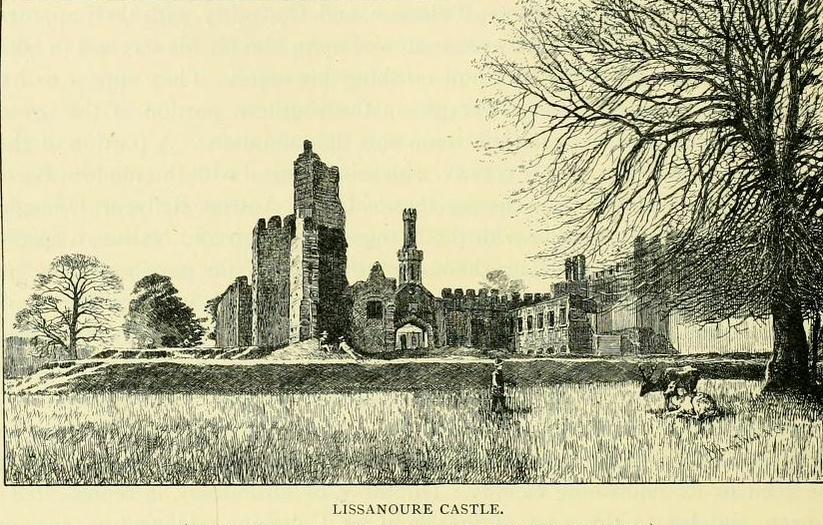 George Hume Macartney died and the Lissanoure and Dervock estates are inherited by his eldest son, George Travers Macartney, a former Captain in the 15th King’s Hussars. He was well regarded by all his tenants and workers, so it came as a tremendous shock when he died of a sudden heart attack on the 29th August 1874 attack aged 44 leaving a wife and four small children. The people of Dervock erected a fountain to him beside the bridge in the centre of the village in his memory and many tributes were paid to him.

Carthanach George Macartney, aged 5 years, inherited the estates. He was officially landlord of Lissanoure and Dervock for a total of 62 years, a record among Irish gentry.

His mother and cousins took charge in the early years but when Carthanach came to power he proved himself kind and generous.

He saw the break-up of the estate under the Land Acts,which started in 1881, under which his tenantry eventually became owner-occupiers and he was left only with the lands immediately around his home, which he farmed.

Ruins of Lissanoure Castle taken in 1907

The estate was requisitioned by the British Army whose 61st Petrol brigade established the main petrol depot for Northern Ireland there.

The Mackie family of James Mackie & Sons of Belfast, once the world’s largest producers of textile machinery and major contributors to the war effort with the production of Bofors gun shells and the fuselage for Stirling bombers, buy the estate from the Macartney family.

U.S. Army 41st Group arrived and used the estate as a training base for D-Day.

The estate was derequisitioned and the Mackie family retook possession. The primary use was as a traditional sporting estate for the family and their guests. Given the international nature of James Mackie & Sons, Lissanoure Castle often hosted guests and friends from all over the world.

Tom Boyd was made manager to the estate. Much building and repair work needed to be done to rectify war-time damage. There were no farm buildings left so the Castle coach-house and stable yard were converted into byres and a herd of milking Ayrshire was started. 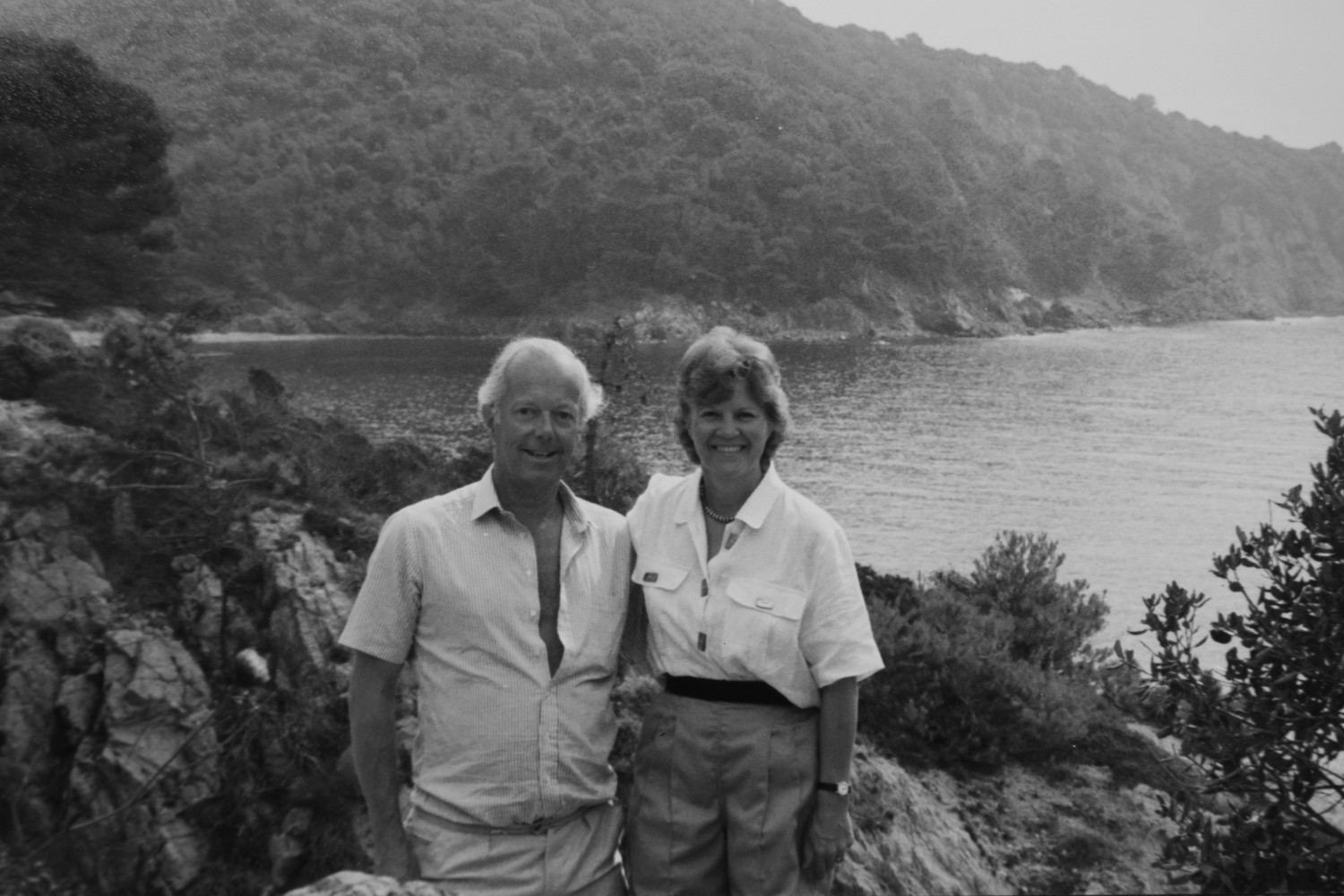 Denis Mackie, grandson of James Mackie, bought out the interests of the other members of the family and moved to live there full time with his wife, Susie and children.
They developed the farm and more sheds were put up for beef livestock around the Castle, and the byres were stripped and stables were installed for horses.

The stables were no longer needed for horses so the coach-house and stables were converted into large function rooms to be rented out for weddings, parties and conferences.

Peter and Emily Mackie took over the full-time running of Lissanoure Castle and the estate. They have continued with the renovating work started by his parents of, the Castle, and have extensively landscaped the grounds removing the redundant agricultural buildings, to create the romantic setting for the coach-house, courtyard and ruins overlooking the lake. Emily restored the clock tower with the clock for Peter’s 50th birthday (see if you can work out the letters!).

The Castle sits in the centre of the demesne, which is still an active and extensive farm, with a combination of livestock, forestry, turbary, let land and property. Since 2000, over 40,000 deciduous, coniferous and specimen trees have been planted, replicating the extensive planting carried out by George, Earl of Macartney, some two hundred years before.